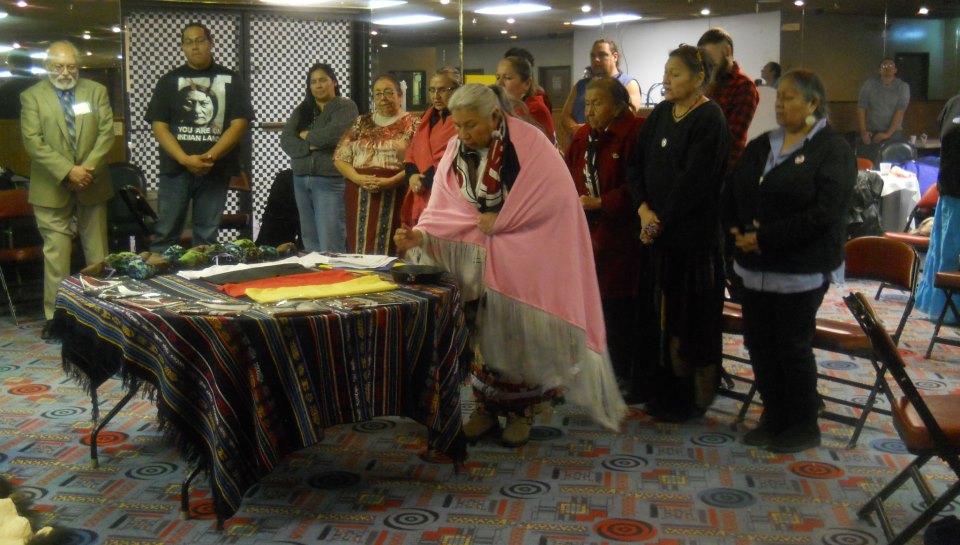 “ We agree to the mutual, collective, and lawful enforcement of our responsibilities to protect our lands, waters, and air by all means necessary, and if called on to do so, we will exercise our peace and friendship by lawfully defending one another’s lands, waters, air, and sacred sites from the threat of tar sands projects, provided that each signatory Indigenous Nation reserves and does not cede their rights to act independently as the tribal governments see fit to protect their respective tribal interests, further provided that each signatory Indigenous Nation reserves its inherent sovereign right to take whatever governmental action and strategy that its governing body sees fit to best protect and advance tribal interests affected by the pipeline project consistent with the agreements made herein and subject to the laws and available resources of each respective nation.

This Treaty of mutual defense and support is made on the occasion of the 150 year anniversary of the Treaty Between the Pawnee and Yankton Sioux concluded between the Pawnee Nation and the Ihanktonwan Oyate/Yankton Sioux Tribe on January 23rd, 1863, and the parties thereto hereby commemorate the signing of that historic treaty that has endured without violation for 150 years.”

so beautiful to see these brave women standing tall for future generations!

prayers for the wisdom of our women leaders

Our ears are wide open, and our hearts.

These great women, leaders, are making a very good statement here.  I hope the governments involved will heed their call for the protection of our mother and all her inhabitants.  Thank you for sharing.

Comment by Quetzalcoatl- Mexica Vikingr on January 27, 2013 at 4:59am
Well done. Powerful words. Powerful Alliance. This is duly noted. A'ho.

All Tribes, Nations and Peoples Council of Fires