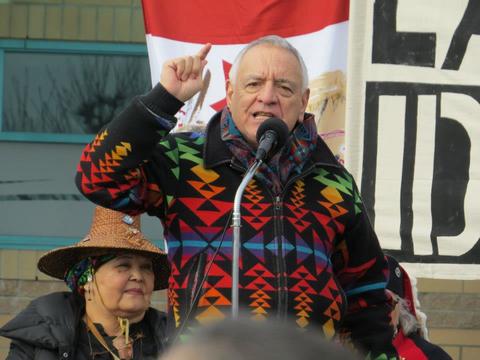 “My heartfelt thanksgiving to Prime Minister Stephen Harper and his Conservative Government for their on-going and deeping injustices to our Aboriginal Peoples, our fellow  Canadians and Mother Earth!

These continuing and deepening injust and disrespectful actions of Prime Minister Harper and before him his Liberal Predecessors, have ignited and fully awakened a long awaited cultural and spiritual movement of Indigenous Peoples and their Allies. This cultural and spiritual Movement is growing stronger with every passing day and is and will have long wide-ranging global impacts!

As long prophesied by our Wise Elders and Visionaries, this rapidly emerging Spiritual and Cultural Movement for Protecting our Mother Earth, for uplifting of Social Justice and for Honoring  our Treaties has long been gathering strength, commitment and courage in the hearts and minds of our Indigenous Peoples and other Members of the Human Family for many years! It is spiritually and culturally grounded and will not be quieted or defeated!

May we never forget, no matter how great the challenges may be before us, there is no Power on Earth or Heaven that can stop the ultimate victory by our Indigenous Peoples and our Allies in fulfilling our long-held Prophecies! We will be tested, but we will not be defeated!

As long as we continue to  Walk the Red Road with our prayers, songs and ceremonies, there is no forces, of any kind, except our own disunity, that will  prevent us from achieving complete victory over the greedy, International Corporate Forces leagued against us!

We are the prayers, the songs and ceremonies of those who are walking the Red Road before us! We are their spiritual representatives on Mother Earth! We have never surrendered and we will  never surrender our love for our Creator, the welfare of our Indigenous Peoples and Human Family and our Sacred Covenant with our Beloved Creator that we would protect our Mother Earth and our future generations, without hesitation and with whatever sacrifice that is required!

This includes the future of all the children of Mother Earth, including the future generations of those parents and grandparents that are currently lost in the illusion of Material Wealth and Power!  In their spiritual blindness that are choosing to fight a losing, but devasting battle with the natural laws of the Creator, that in the end, if successful will destroy their own children and future generations!" We will not allow this to happen!

Shared at the Idle No More Rally, the Willow Brook Mall in Langley, BC, January 19, 2013 by

High Phil, this is Darren Anderson. I am returning your email with the best of greetings. As you know, I have just joined The 4 Worlds and am exited about sharing all the wisdom and knowledge that I have, as well as establishing contacts and relationships with others to further my learning about the Red road and the Four Directions. I live in Spruce Grove, Alberta on an acreage with my wife Lisa and 3 children. Lily 5, Liam 3 and Kaleia 2. As you can tell I have my hands full with the blessings that the Creator has bestowed upon me. Though I am still busy, I still find time to practice my spirituality every day by prayers, smudging and teaching my kids about these ways to the best of my ability, although I am still a novice. The organizations on this website, seemed to be universal, open, non-judgemental and have a focus on the important things in life, with keeping in the way that the Creator intended all of us to interact and live in harmony. I have always been very spiritual for as long as I can remember and for years I was searching for a way to express my spirituality and interact with all of Creation. I found that religions always had energies that were not coducive to mine, so I did not want to associate myself with something that continually maintained the viewpoint, "Unless you believe as we do, you are wrong and we are right.". Religions predominantly are always looking for faults in everyone instead of building you up and teaching you to interact and appreciate all that you have in your life. Religions initially had good intentions but have since been corrupted and manipulated to cater to those in power. The ways that I now follow, have ended my search for a way to express my spirituality and have given me a way to interact and share this beautiful life we find ourselves in. We are all connected, and come from the Creator, and we need to come together to live in harmony. This way has found a meaning to me through the teachings of a Dakota Innipi, Sweat Lodge. I appreciate how you have reached out to me and look forward to further communication with you. Peace, Love and Light. Mitakuye Oyasin. Darren.

In unity, healing, health and harmony for the betterment of humankind and our MotherEarth Kukwstumckacw ti amha qwalut.swa. Thank you for your words!

Beautifully and insightfully spoken, the work in Langley yesterday.

We are doing what we can to keep information about INM flowing across the border in upstate NY, where the US notoriously blocks the tiniest rustling of FIrst Nations "activity" (read insurrection).

Keep well,you and your family, well and strong--

Thank you for your words brother...NOW, let us wake up the rest of the world! AHO!

What I also loved about this article is the holy women sitting right behind him to his left. The return of the sacred feminine will balance the planet.

Comment by Quetzalcoatl- Mexica Vikingr on January 20, 2013 at 7:26am
Peace and blessings Brother. You speak the truth. We are fortunate for Your Leadership and Support. Mitakuye Oyasin.

How long it will take for all our governmental leaders to get the message our Mother is giving us each day, and Elders like yourself, Chief Lane, Don Alejandro and so many more before and now is anyone's guess.  But so long as we have voices and the ability to write, if we keep saying it, over and over again, they will get the message and heed the call.  Thank you for your service for all the people!  Many blessings -