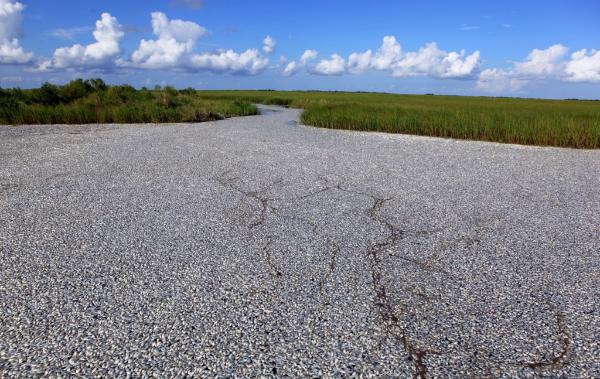 What you see above isn't a rural gravel road. It's a Louisiana waterway, its surface completely covered with dead sea life -- a mishmash of species of fish, crabs, stingray and eel. New Orleans CBS affiliate WWL-TV reports that even a whale was found dead in the area, a stretch of coastal Louisiana hit hard this summer by oil from BP's busted Gulf well.

Fish kills are fairly common along the Gulf Coast, particularly during the summer
in the area near the mouth of the Mississippi, the site of this kill.
The area is rife with dead zones -- stretches where sudden oxygen
depletion can cause widespread death. But those kills tend to be limited
to a single species of fish, rather than the broad sort of die-off
involved in this kill.

And therein lies the concern of Gulf residents, who suspect this may be yet another side effect of the catastrophic BP oil
spill.

Plaquemines Parish President Billy Nungesser sounded the alarm bells Monday, distributing the photos here to the local media. Nungesser said that no
testing is currently planned to determine how the kill may relate to
the BP oil disaster, but he pleaded with officials from the Louisiana Department of Wildlife and Fisheries, the Environmental Protection Agency and the National Oceanic and Atmospheric Administration to investigate. 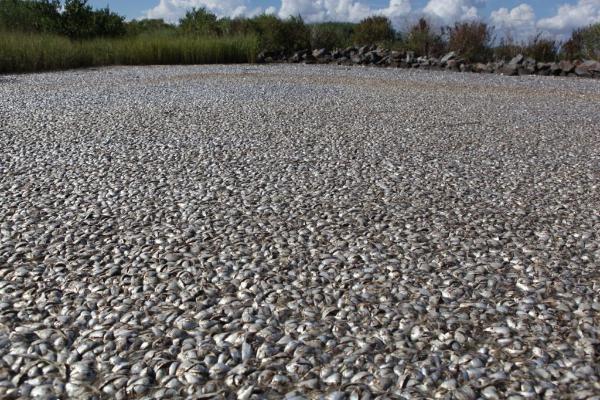 "We can't continue to see these fish kills,'' Nungesser said in a statement. "We need some additional tests to find
out why these fish are dying in large numbers. If it is low oxygen, we
need to identify the cause."


Dead zones are increasingly common in the world's oceans. But they're particularly so off Louisiana, because nutrient-rich water and sediment from the nation's agricultural runoff travels downriver and is dumped into the Gulf. Various species of single-celled plantlike organisms flourish in waters
enriched with chemical nutrients -- organisms that go on to vastly
deplete the oxygen in the water they inhabit.

Many scientists have feared that an influx of oil-eating microbes would lead to more Gulf Coast dead zones, since the microbes use large amounts of oxygen when they consume the oil particles pro....

UPDATE: The Louisiana Department of Wildlife and Fisheries investigated the fish kill and determined that it was the result of low oxygen levels caused by low tides and high temperatures.