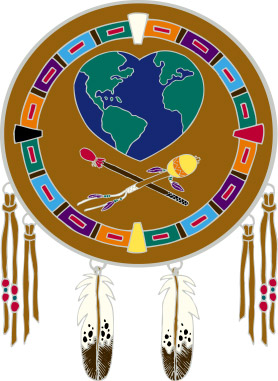 These Indigenous prophecies include the Mayan, the Reunion of the Condor and the Eagle, the Eighth Council Fire, the Return of the White Buffalo and the Prophecies of Black Elk , Deganiwida, Quetzalcoatl, Sweet Medicine, Handsome Lake and the Hopi`s. It is important to note that all these Prophecies are firmly rooted in the spiritual understanding and consciousness of the Oneness and Prior Unity of the Human Family.

With this spiritual understanding, perspective and consciousness, it is clear to see that the unshakable foundation of  the New Global Civilization, that is now unfolding, includes the Equality of Men and Women, the Balancing of the Extremes of Wealth and Poverty, the Elimination of All Forms of Prejudice, the Harmony of Science and Spirituality, Universal Education that is culturally and spiritually respectful of all Members of the Human Family, the Independent Investigation of Truth and Unity in Diversity!  A New World Civilization where the voices,  wisdom and vision of Indigenous Peoples and other marginalized members of the Human Family are fully,  justly and respectfully represented.”

Words could ever expressed the deep joy I experienced when I decided to take the time and read through this article.  I am so happy to come across another soul who mirror my heartfelt views and thinking.  Why must we focus all of our energies on other prophecies, and forgetting that we too have prophets!  This article truly laid to rest a feeling of loneliness in my Community.  A community in Southwest Georgia, namely, Quitman County, Randolph and Lumpkin; all in Southwest Georgia.  The home of the Black Ancient Cherokee Kituwah People.  We lost our last stand to maintain our identity in 1960, after the civil rights movement fluff (1958-1960).  While the colonizer and created offspring publicized the importance of civil rights for all, the Core of Army Engineers came to our village and remove every artifacts , identifying our existence.  The Bureau of Indian Affairs released that list to me.  I am now , as a long solider applying to activate my tribe!

I would like to share here a message from the awakening Vedruss population. Our civilization was a civilization centered around finding one's soul mate.

We fell asleep 5,000 years ago after the terrible Kurukshetra war of India which effected all of our people across all Vedruss lands. In order to avert psychic war we fell asleep. Even as far back as 10,000 years ago children were starting to be born partially asleep, without access to Universal memory. It was because of this that initiated the stone Dolmens built all over the ancient Vedruss land 10,000 years ago from Europe and Russia, to the Middle East, India and China. Living masters went to the tombs to leave their body over and over again until they passed on. They stay to this day at these dolmens awaiting to pass down information of Universal Telegony really, since the Vedruss culture was centered around finding one's soul mate and preserving the energy of love in the family forever.

Detailed images have been discovered which can start to awaken the sleeping Vedruss population. This includes a detailed image of what is being called the Anti-reason or Anti-mind virus. There are 9 steps to this virus, and interestingly enough there are various cultures in the world which use the number 9 to describe the way that occult alien forces combine with the world of the creator's marvelous creations. The 9 planes of the Scandinavian world tree, the 9 lords of the halls of Amenti in Egypt, the 9 Annunaki lords of the ancient Sumerian history, and the 9 lords of death or night of the Mayan civilization. It is no coincidence that this formula for the Anti-mind virus I have discovered is not only how the Universal complexes of partial urges get us to think like them, but also how these Universal complexes of partial urges even create the different extra-terrestrial races of the Universe, each one only able to perfect itself in one direction. All of these ancient cultures committed a mistake I believe in regards to the Anti-mind or Anti-reason virus. They did what they were used to doing, which was combining opposites within the forces of the Universe and combining the images of the Anti-mind virus with the images of the creator's creations. This is a mistake I believe, as images were then created which justified using dark forces within good forces, and over time brought to the point where opposites were no longer balanced. Instead, today we have discovered how the Anti-mind or Anti-reason virus works in and of it's own force, and even then also how the natural world of the Creator's creations battle Anti-mind and keep it in check.

Once this Anti-mind virus is described in complete detail, the awakening Vedruss can start rousing their brothers and sisters out of sleep. We will unite with all indigenous people of the world and bring all back to it' primordial garden.

Please accept this message and try to understand with the intellect and feelings together. This is but the beginning of this message and more glad tidings I bring in the whole message I will share a link to here.

Thank you all and Joy and health to your thoughts!

Message to all Indigenous people of the world.

My heart is so happy to see our relatives coming together in this generation.

In this time of life for all Land and Life.  May peace, rain in the hearts of mankind and the world.

Blessings in Balance, from Balance all Blessings Flow in Service to the Holy Ancestors.

We are a family and we love each other, "Micha qu a Waywin"  Grandmother Dee see mana

Thank you Brother Phil Jr. may we pass on the eternal flame onto our grandchildren and light the way for the world to unite in all efforts of LOVE as called upon by the Holy Spirit in each of us.

Thank you Brother Phil, this reminder is always needed , especially as we watch and are part of the unfolding of the Light as the Dark gets ready to rupture.

Comment by Patti O'Donahue on July 16, 2013 at 5:19pm
Thank you Phil for the reassurance as the signs of change are everywhere I look and as a grandmother I am concerned for my own tribe and all life on Mother Earth

Thank you Brother Phil for these words of truth. Many are lost and confused by what they see happening. This is not a Time for fear. It the Time of Our foretold Return. As always, I am grateful for your friendship and Leadership. Peace and Blessings, Q

Thank you, Brother Phil! I hold that new world in my heart and spirit each day. and, even when appearances are to the contrary, I KNOW it even now unfolds. May we bring it into being on every breath!