Imagine What May Happen!

Here is Kinder Morgan’s own presentation for investors provided by Ian Anderson, president of Kinder Morgan Canada. Of course, this information has not been shared with the general public or even our own local, municipal governments:

== Dredge Second Narrows: Kinder Morgan plans to dredge Second Narrows channel to allow larger tankers – the 1-million-barrel Suezmax tankers – to enter Burrard Inlet. Each one of these tankers carries four times as much crude oil as the Exxon Valdez spilled into Prince William Sound. The Kinder Morgan report states that using these larger tankers will save them an extra $1.50 per barrel

This equals an extra $1.5 million for each ship.

This means an extra $21 million dollars for each Suezmax tanker of 1-million barrels.

Or an extra $14.7 million per tanker for the Aframax tankers that they are using now.

At current shipping rates (71 ships per year in 2010), this equals a little over $ 1 billion per year extra money for the Tar Sands oil companies, shipping companies, and Kinder Morgan, the pipeline company.

Their total crude oil shipments in 2010 were worth about $5 billion .. five thousand-million dollars

Growth of Tankers in Vancouver:

The Kinder Morgan Report describes the full potential as “700,000 barrels per day

This equals one Aframax tanker / day, through Vancouver Harbour

or five Suezmax tankers per week.

Their total planned shipments, 288 tankers by 2016, in large Suezmax tankers, at today’s oil prices, would be worth about:

It is a lie that these tanker shipments have been happening for a long time. We have traditionally shipped refined gasoline to communities along the coast, but this is very different from crude oil. Gasoline shipments were much smaller in size, and gasoline floats on water and evaporates. Gasoline is not good for the marine environment if spilled, but crude oil is far worse because it sinks, sticks to birds and sea life, coats the sea bed, kills plants and animals, remains in the soil for decades, and has serious health impacts for humans, plants, and our non-human relatives.

Crude oil shipments along our coast were rare until 2007 when Kinder Morgan, China, and the Tar Sands producers decided to expand the shipping of crude oil through Vancouver.

This is Kinder Morgan’s ultimate goal: to have approximately one giant Suezmax tanker loaded, departing Vancouver each day.

The “Suezmax” tanker has this name because it is the largest tanker that will fit through the Suez Canal in Egypt.

the first oil large oil tankers in BC

For comparison, the Exxon Valdez spilled 266,000 barrels of oil.

Kinder Morgan also wants to divert crude oil from refineries in BC and Washington state, and put that oil on tankers to ship to China, where they can get more money for the crude oil. They explain in their report that they want to increase their “dock capacity” which means they want more oil for ships, less oil for refineries in BC and Washington state. Thus, they would rather risk destroying our coast for a bit more money, rather than refine the oil in BC and provide local jobs with Canadian resources.

Expand in stages: Kinder Morgan has already expanded their Trans Mountain pipeline (“TMX”) from Alberta to BC, and they want to continue to expand in stages. This creeping expansion is a way to fool the public by making supposedly small increases, which ultimately will add up to their full plan. Their report says the pipeline expansion will be “phased to meet demand,” which suggests that they will increase their capacity to meet growing demand in China. The Kinder Morgan report says that  “Trans Mountain can be expanded in stages to access growing demand offshore in China.” This is a trick. The truth is: China would take all the oil that Kinder Morgan and Canada could deliver right now today. They want to expand to more shipping because it will make them more money, and they are doing this in “stages” to fool the people and municipal governments in BC.

We are being asked to risk our coast, our marine environment, our fisheries, our coastal communities, and our local economies so the tar sands producers and Kinder Morgan can ship more crude oil and make more money .. billions of dollars.

2007, Canada and China announce that they are “testing the feasibility” of shipping crude oil from Vancouver. According to Statistics Canada “Spotlight: Canada-China Trade,” November 26, 2007: “In the first seven months of 2007, the value of crude oil exports to China surpassed $150 million, as China and Canada tested out the logistics of shipping Alberta oil through the Port of Vancouver.”

May 26, 2010, Reuters .. pipeline project slowed by demand, but .. “projects to move crude from Alberta oil sands to the Pacific Coast, where it could be shipped by tanker to Asia ... Canadian government and producers in Alberta .. have called for a large export line to the Pacific Coast  ... Trans Mountain ships 300,000 barrels a day of oil to Vancouver and Washington state from Alberta ..

These stories point out that expanding the pipelines and tankers on the west coast is a means to expand the tarsands.

The BC government and Federal Government of Canada has supported oil sands development with pipeline and shipping infrastructure specifically built for oil sands producers. This makes a mockery of the Liberal government’s claims of “green” energy and economy. BC is playing a central role in oilsands expansion, one of the most environmentally disastrous energy developments in world history. The carbon-intensive, energy-intensive, low-net-energy, project that is heating the atmosphere and destroying the northern tundra ecosystem is undermining Canada’s environmental reputation around the world.

1. Kinder Morgan, Trans-Mountain Pipeline Expansion (TMX), from Edmonton, through Jasper and Kamloops, to terminals in Burnaby and Washington State. Westbridge Terminal in Burnaby now ships about

“Normal spillage” acknowledged by the industry as a routine “expense,” accounts for most oil contamination. Normal spillage includes routine leaks and spills along pipelines, at refineries and terminals, and includes toxic waste products that leech into the ground. Around the world, in all oil ports, more oil is spilled into the water as “normal spillage” than from giant oil spills.

Richard Kinder and Bill Morgan: are ex-Enron billionaires. Enron is the company that swindled their own shareholders, stealing some $11 billion from their own company. Richard Kinder worked at Enron from its founding in 1985 until 1996, and received a $30 million retirement package when he left Enron. According to Forbes magazine, 2006, Kinder has a personal wealth of $2.4-billion

At Enron, Kinder served as General Counsel, Chief of Staff; Vice Chairman, President, and Chief Operating Officer. He helped establish Enron Global Power & Pipelines (EPP), an independent company designed by Enron to hide liabilities and debts from shareholders and regulators. The Enron swindle was exposed in 2001. Shareholders and employees lost billions in pensions and stocks.

Kinder donates to Conservative Political causes. He is a personal friend of Republican strategist Karl Rove; and was one of the largest George Bush donors.

== Corruption in BC Marine Safety

Kinder-Morgan has their own man on the BC Safety Authority, which will help Kinder-Morgan get their shipping permits:

BC Safety Authority board includes, Arthur Daniel Miller, former BC Deputy Premier and Minister of Energy and Mines; Lorna Pawluk a lawyer with Bernard & Partners, who specialize in maritime law; and Kinder-Morgan’s own man: Richard Ballantyne.

Richard Ballantyne, B.C. Liberal insider, directing the activities of BC GAS. Ballantyne worked for Gordon Campbell and Richard Neufeld (Minister of Energy and Mines). He was an MLA elected in 1991 with BC Reform Party; one of architects of the BC Liberal privatization scheme, and he is a key Kinder Morgan player, who has worked for Richard Kinder.

Ballantyne helped transfer the public BC GAS to the Kinder-Morgan/Carlyle-Group; and he helped Neufeld stonewall public inquiry of the deal. Ballantyne held executive positions at Terasen Pipelines, Trans Mountain Pipe Line, BC Gas Utility Limited, and is a former chair of the Canadian Energy Pipeline Association. He now acts as a consultant for Kinder-Morgan as he simultaneously heads the new “British Columbia Safety Authority” that will presumably rule on the “safety” of tankers in B.C. waters. 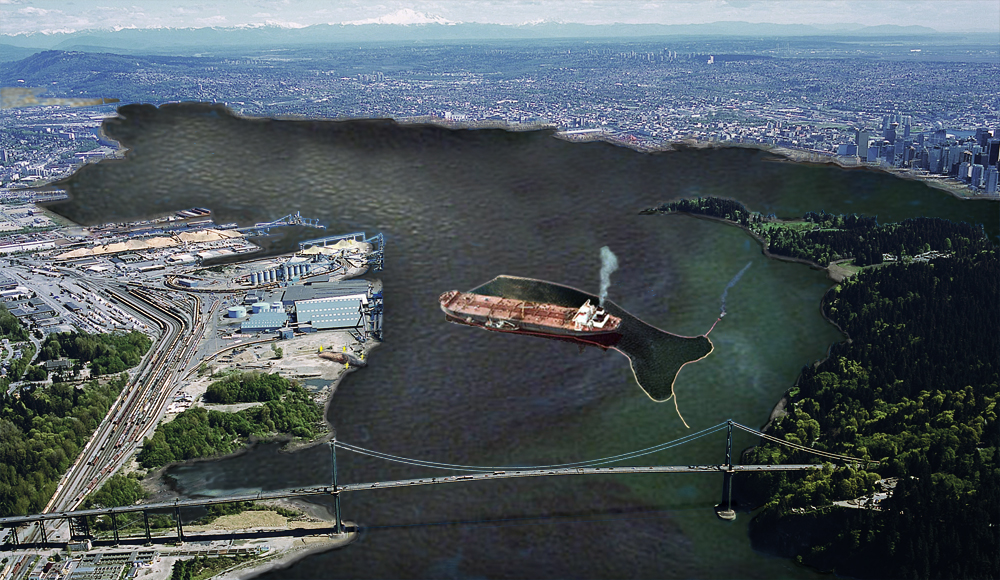 Do we support this potential future?

Terrifying and frightening!  How will we stop this?