The Prophecy of the Reunion of the Condor and Eagle is Continuing to Unfold , As Promised 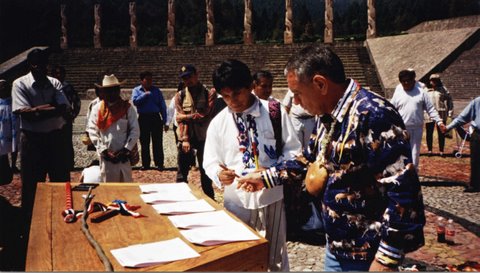 Prior to the arrival of the first European explorers an Indigenous network based in spiritual and cultural relationships and protocols existed for centuries across the Western Hemisphere. Through this network of many networks, this Hoop of Many Hoops, Indigenous Peoples shared knowledge, capacity and resources for mutual aid, trade and development. This ancient network, based in life-preserving and life enhancing spiritual values and guiding  principles, known by many Indigenous Peoples across the Hemisphere as the Union of the Condor and Eagle, was broken apart by European colonization and the subsequent decimation of Indigenous Nations and Peoples across the Americas.

An ancient prophecy predicts, after a long and bitter spiritual wintertime that the “Reunion of the Condor (Indigenous Peoples of the South), and the Eagle, (Indigenous Peoples of the North),” will be realized. It is promised that when the Reunion of the Condor and Eagle is fully realized, a great era of peace, well-being and prosperity will follow for all members of the Human Family.

The Reunion of the Condor and Eagle is intimately connected to other Indigenous prophecies across the Americas. These include, the Time of the Eighth Council Fire, the Hopi Prophecies, the Slaying and Return of the White Buffalo, the Mayan 2012 Prophecy, the Emergence of the Fourth World, the Return of Quetzalcoatl, the Prophecies of Chilam-Balam, and the fulfillment of Black Elk’s Daybreak Star Prophesy.

So strong is the belief in this prophecy among some Indigenous Peoples, that the Otomi Peoples in the state of Mexico have built a vast ceremonial amphitheatre dedicated to the “Reunion of the Condor and the Eagle.”  The focal point of this amazing construction is a gigantic stone carving of a Condor and an Eagle joined in a loving embrace. It was built largely by the volunteer labour of thousands of materially poor Indigenous Peoples out of love and faith in this prophecy.  It was at this location that the first Reunion of the Condor and Eagle, International Indigenous Trade and Social Development Agreement and Unity Pact was signed on May 5, 1999, (12 years ago today) between grassroots Indigenous leaders of more than 100,000 Indigenous Peoples from Mexico and representatives of First Nations from Canada and the U.S.A. (Picture below) The Movement of the Condor and the Eagle continues to gain strength and momentum through the dedicated action of many different Indigenous networks and their allies across the Americas despite on-going opposition from adverse political and economic forces, especially natural resource extraction interests. Comment by Raymond Hermenet on May 5, 2011 at 9:31pm
Brother Phil, In response to FWI coming to the City of Knowledge Panama:
This is wonderful news. Will you be coming to Panama in the near future? There is so much I would like to share with you it is difficult for me at this moment to know where to start. If you would make the time to visit www.myspace.com\raymondhermenet you can appreciate my meaning. Let me know your thoughts and I look forwards to our further collaboration.
Blessings,
Raymond

Comment by Raymond Hermenet on May 5, 2011 at 8:17pm
Just Google Peace and Dignity Journey and you will find a lot of information.

Interesting, Raymond!  I had not known about that ... Mx

I am new to this Circle and would like to know if their are any future gatherings set up between the Eagle and the Condor? This prophecy is where my heart lies...the hope of tomorrow for all our children of the earth. I want to be involved. If anyone can help guide me, I would be most honored.

Comment by Raymond Hermenet on May 5, 2011 at 5:44pm
October 27th, 2004 the Eagle from the North and the Condor from the South met in Panama the Mother Holy land reuniting the energies again after more than 500 years of colonization and after the making of the Panama Canal which broke the back of Turtle Island.
from the from the South