Remembering Mato Gi, (Brown Bear) Phil Lane Sr. Who Passed To The Other Side Camp More Than Fifteen Years Ago 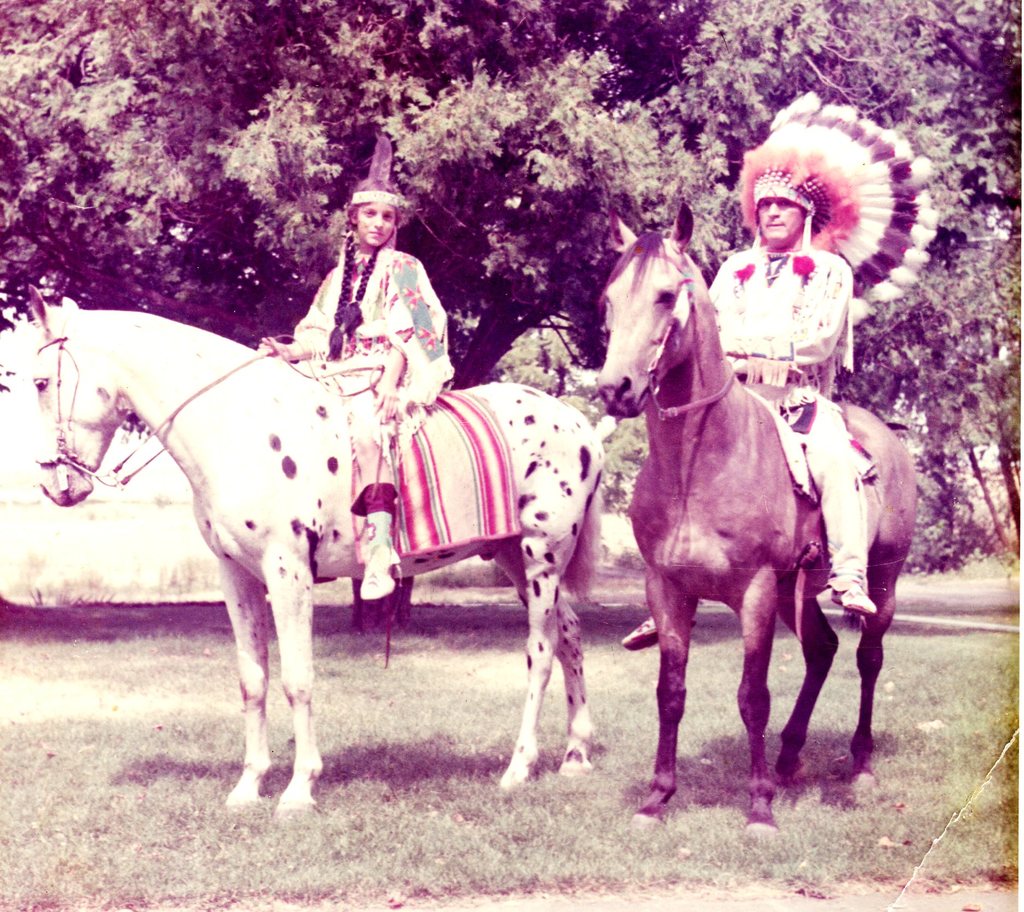 Seven years ago today, after 89 well-lived winters, Mato Gi (Brown Bear), Philip N. Lane, Sr. passed to the spiritual world on the beautiful spring morning of March 29, 2004. After joking, laughing, and eating a plate of his favorite pancakes made by his daughter Deloria, (Pictured Above) Brown Bear sat peacefully in his favorite chair and looked out over his beloved Mill Creek and the Blue Mountains. Then in a moment he was gone, his absence only noted by the tilt of his head. He told his good friend, Father Steve Woolley last fall, when he discussed his Dakota-Christian funeral celebration... "I will die in the spring, in March!" In the winter of his life, he left in the new spring, as promised, leaving his relatives to cherish the life he lived so well.

Born to a long lineage of hereditary chiefs and spiritual leaders of the White Swan Band of the Yankton Sioux Tribe, Brown Bear was born on January 11, 1915 on the Standing Rock Sioux Reservation. His parents were Lyma Deloria and Fred Lane. He was largely raised by his grandfather, Philip Deloria (Tipi Sapa), who was the first American Indian to become an ordained Episcopalian minister. As well, Tipi Sapa retained his chieftainship until his death. Brown Bear never lost his deep connection with his many cherished relatives in the Dakotas and made many visits with his family back to his beloved homeland throughout his lifetime.

He started his education at St. Elizabeth Mission School in Wakpala, SD. He then went on to Haskell Indian School in Lawrence, KS to finish his high school education. In 1994, he was given the Haskell Outstanding Alumni Award.

It was at Haskell where Phil met Lena Rose "Bow" Vale, a 13-year old Chickasaw from Oklahoma who later became his wife. He always liked to tell about their meeting . . . he was 17, she was 13. Ten years after they met, he came to Oklahoma with $2,000 and a marriage proposal . . . coming to "claim what's mine" he'd say. If you spent any time at all with Phil, you'd know that his life revolved around his family and most especially his sweetheart of 70 years, Bow.

At Haskell Phil learned to box and met his lifelong friend Boots LaCourse from the Umatilla Indian Reservation. Phil accompanied Boots home in 1934 after graduation. He stayed in the Pacific Northwest, largely due to generous and warmhearted hospitality of the Umatilla and Warm Springs people. Coming from a buffalo culture himself, he appreciated the central role he saw the salmon playing in the lives of the Plateau people.

From Pendleton he went to the Warm Springs Indian Reservation, where he was employed with a Bureau of Indian Affairs survey crew. His supervisor Charlie Chester suggested he go to Oregon State where he was a boxer on the varsity team for 4 years. He graduated in 1941 with a Bachelor of Science in Forestry. Phil was honoured by Oregon State University (OSU) with the E.B. Lemon Distinguished Alumni Award in 1992, the OSU Alumni Association's highest award, and the Forestry Alumni Association's Individual Achievement Award.

During World War II, he was recruited to work on the Third Locks Project in the Panama Canal. He served on active duty from October 30, 1943 to April 23, 1946 with the Naval Air Corps and the Sea Bees. In 1948, he transferred with the U. S. Army Corps of Engineers to McNary, Oregon. He worked in structural design on Columbia River dams and retired after 30 years in 1971. His innovative design for fish ladders led to saving migrating salmon and his design of vertical locks merited two Presidential Citations from Lyndon B. Johnson.

Phil raised and trained quarter horses. Phil had "horse medicine." He had such an amazing understanding with his horses, which enabled him to win Sixth in the world in cow cutting in 1982 on Bold Mount, one of his many championship horses. In 1990 he won the open championship for Area I National Cutting Horse Association with Tivios Hired Hand.

Phil had over 250 amateur and professional fights spanning 18 years. At Oregon State he was the runner-up of the Pacific Coast Intercollegiate Lightweight Boxing Championship. In 1947 he was the All-Service Lightweight Boxing Champion, Panama Canal Division. During the years when money was scarce, he fought professional fights under the names Billy Sunshine, Flash Gordon, Pug Lane, and the Kansas Express.

He always reminded us that we needed to "slow down." He cherished a real "Indian visit," telling the story about his grandfather Low Dog, a Custer battle veteran, who came to visit and stayed for 6 months.

The way Phil demonstrated the respect principle he inherited from his beloved old people was through the way he cared for and took care of everything in his life. The way he groomed his horses, kept up his machinery, tended his relationships, oiled his tack, and even swept his driveway was evidence of his respect for all living things. He was completely enamoured of children of all sizes and shapes. He insisted they all call him Lala (grandpa). He could play "make-believe" with the best of them. If you knew him, you heard him exclaim, "My friend," each time he ran into someone he knew.

One of Phil's very favorite sayings was "Aren't we all the Children of One Father (the Creator) and one mother (the Earth)?" That sacred teaching guided him during a long career of volunteering. In 1946 he served on the Umatilla School Board and was Chairman from 1953-54. In 1969 Phil Sr. and Phil Jr. established the first ever Native American prison group in North America with the brothers at the Washington State Penitentiary. Phil cherished this service and still continued to be in close contact with the many brothers he worked with, who are now enjoying their freedom due to Phil's loving and wise influence. For this effort, in 1984 he received the Governor's Distinguished Volunteer Award and the State of Washington Certificate of Appreciation.

In 1975 Phil received the Baha'i Human Rights Award. In 1982 he was a founding member of the Four Worlds International Elders Council. He received the Eli S. Parker Award from the American Indian Science and Engineering Society (AISES) in 1987 and served on its Council of Elders until going to the spiritual world. Every year he looked forward with great anticipation to attending the annual conference so he could share all his energy with students and old friends. Each one received a full measure of his love, attention, and encouragement.

MITAKUYEPI - WOPILA
"In our old Lakota viewpoint on life, with all of its aspects of the human heart, our old old elders could see that everything that has life tries to be round, with a very holy center. The center wherein resided our beautiful old grandmothers and grandfathers. Together, they extended out to all who could hear their voices, their love, their encouragement, their gratitude, their understanding, their compassion always softened by their actions and words of their forgiveness."


ONLY WORDS
"The heart is always in search of happiness. Nothing makes one feel lonelier nor more helpless than no one to appreciate one's being and efforts to make the home a haven from life's daily problems. I charge you to hold one another gently but firmly. The strength, courage and love united in one union can withstand the bitter storms that may be faced in one's journey.

There is nothing so satisfying as to toil for someone you love or someone by whom you are loved.

Press on Mitakuyepi, there is no time to waste!"


TRIBUTE TO INDIAN HONOUR
"Our people love to honor people. We are a race of people who believes in honor. We know honor stimulates people. The man honoured his wife and the wife honoured her husband. And they lived in such beauty. They had a devotion which individually and collectively we all need if we're going to make this a better world to live in."

TRIBUTE TO THE OLD PEOPLE
"There were prophecies I remember, as a boy, saying we're going to go through some bitter, bitter times. We're going to shed some tears. But the time would come when we begin to see the light again. When spring would start coming again. Think of all the potential that you have. Think of the contributions you all can make. Think of the love in your hearts that you can share with other people. Be quick to forgive people (if they can hurt you in some way). Be like the old people..."

Comment by Stephen Bamford on April 3, 2011 at 7:32am
Such wonderful growth present in your sharing of this for the benefit of the people.  It truly shows the transcendency over the obstacles each of us faces.  This is truly transformative and great.  Thank you for sharing.  Many blessings to you and yours.  And as the lady shared below, yes, his spirit shines on and through you, with the added benefit of your own "amped" up positive energy!

Comment by andrea on March 29, 2011 at 3:17pm
That is just so beautiful Phil. A wonderful way to honor a good man and a loving family.

Comment by N Gene Dunning on March 29, 2011 at 1:12pm
Phil~ You carry with you, your Father's spirit of caring and compassion. I remember spending some time around him and feel some of his wisdom rubbed off on me. Thank you for all that you do. ~Gene

Comment by Warren Petoskey on March 29, 2011 at 12:49pm
I remember. He walked on shortly after my father "Early Morning Light."

Comment by Michelle Morning Star Doherty on March 29, 2011 at 9:36am
What a beautiful family you come from, dear Phil Lane, Jr!  Reading your family history and your father's words fills my spirit.....

Comment by Linda Rae Mays on March 29, 2011 at 7:30am
This is so beautiful, Uncle Phil. Thank you so much for sharing it with us all! I feel honored to have been on the other side of this sharing. <3

Comment by fred roland on March 29, 2011 at 5:35am
so grateful for relations who lived a good life and shared compassion for life all around him.This continues with our brother Phil Lane Jr as i know him . Love and Blessings