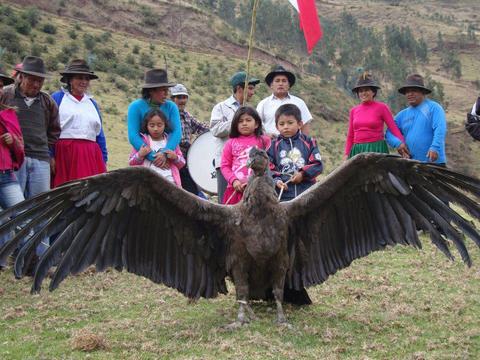 Prior to the arrival of the first European explorers an Indigenous kinship network based in spiritual and cultural relationships and protocols existed for centuries across the Western Hemisphere. Through this network of many networks, this Hoop of Many Hoops, Indigenous Peoples shared knowledge, capacity and resources for mutual aid, trade and development. This ancient network, based in life-preserving and life enhancing spiritual values and principles, known by many Indigenous Peoples across the Hemisphere as the Union of the Condor and Eagle, was shattered by European colonization and the subsequent decimation of Indigenous Nations and Peoples across the Americas.

The prophecy of the Reunion of the Condor and the Eagle is retold by many Indigenous Nations and Peoples. The Q'ero People’s prophecies, for instance, say that when the Eagle of the North and the Condor of the South fly together, the Peoples of Mother Earth will awaken. They say that the Eagles of the North cannot be free without the Condors of the South.

All of these ancient prophecies predict, after a long and bitter spiritual wintertime, that the “Reunion of the Condor (Indigenous Peoples of the South), and the Eagle, (Indigenous Peoples of the North),” will be realized. It is promised that when the Reunion of the Condor and Eagle is fully realized, a great era of peace, well-being and prosperity will follow for all members of the Human Family.

The Reunion of the Condor and Eagle is intimately connected to other Indigenous prophecies across the Americas. These include the Time of the Eighth Council Fire, the Hopi Prophecies, the Slaying and Return of the White Buffalo, the Mayan 2012 Prophecy and the Emergence of the Fifth Sun, the Return of Quetzalcoatl, the Prophecies of Chilam-Balam, the Prophecies of Sweet Medicine, and the fulfillment of Black Elk’s Daybreak Star Prophesy.

So strong is the belief in this prophecy among some Indigenous Peoples, that the Otomi Peoples in the State of Mexico have built a vast ceremonial amphitheatre dedicated to the “Reunion of the Condor and the Eagle.”  The focal point of this amazing construction is a gigantic stone carving of a Condor and an Eagle joined in a loving embrace. It was built largely by the volunteer labour of thousands of materially poor Indigenous Peoples out of love and faith in this prophecy.

It was at this location that the first Reunion of the Condor and Eagle, International Indigenous Trade and Social Development Agreement and Unity Pact was signed on May 5, 1999, between grassroots Indigenous leaders of more than 100,000 Indigenous Peoples from Mexico and representatives of First Nations from Canada and the U.S.A.  The Movement of the Condor and the Eagle continues to gain strength and momentum through the dedicated action of many different Indigenous networks and their allies across the Americas despite on-going opposition from adverse political and economic forces, especially natural resource extraction interests.

Now, following the end of the long-count of the Mayan Calendar, December 21, 2012 and the beginning of the 5th Sun, the rising of Indigenous Peoples and their Allies is accelerating everywhere on Mother Earth. Indigenous women and their sisters of the Human Family are destined to play a great role in this global transformation process!

Thanks for relating the story.  It corresponds very strongly with Dreaming I share with my three sons, and a few men, of the end of political double talk patterns becoming enabled.  How I receive these dreams is as information of weather events begun to happen already, which are going to enable the airs circulating in northern and southern hemispheres to recombine.  Air circulated seperate in north and south from around the time deserts came into being, and around the time of the tower of Babel, and the parts of the Bible with Ezra leading men away from Babylon.  Indigenous Australian stories include similar about a man who caused everybody speak different languages from one another, on each side of every river, as he travelled down the east coast of this land.  The American prophesy aligns in my mind also with the part of New Testament about everybody hearing their own tongue in one another at Pentecoste.  That ability began in me myself, ten years ago, after a major recovery in my health, and I now have no fear of not knowing the languages I have not grown up speaking, because I find meaning, and corroborate it, nevertheless.  As I understand all these possibilities, it is that the Earth's magnetism need re-adjust itself before an actual shift of axis alignment of our rotation in orbit around the sun will happen, and re-align the equator with pyramids locations.  However, it can be far simpler to understand without all the scientist's baggage, and birds will show us the way.

Long may these wonderful birds fly and with them, the aspirations of the good people in whose hearts they are carried.  Many blessings to you, Chief Phil and all yours and our relations!  Thank you for sharing these with everyone!

Thank you for sharing this and you are right. Here in Australia we the Origini people are awakening to walk with you our brother and sisters.

what beautiful news we need