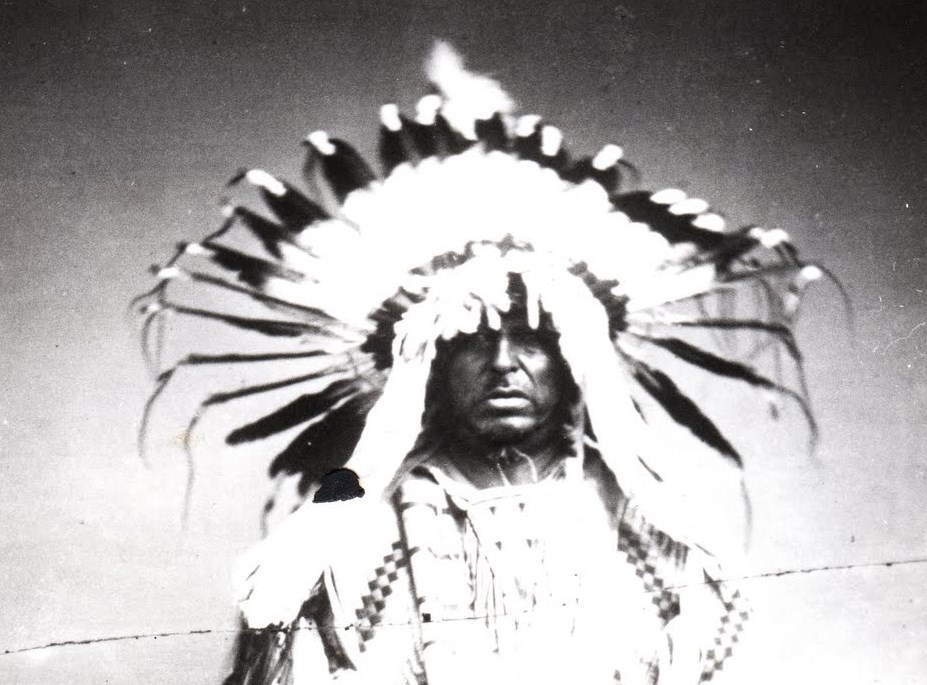 Through spending a lot of time in isolation praying and speaking with the spirits Hinhan Wicasa developed an intimate relationship with the Thunder Spirits.

One time, a white man, one of the first to live in the Yankton area, taunted Hinhan Wicasa about his powers, saying that he was just a fake. He said that Hinhan Wicasa should stand in a metal wash tub and hold an iron crowbar toward the sky during the next thunderstorm to demonstrate that he really had influence with the Thunders. The white man proposed that if Hinhan Wicasa was killed, he would inherit Hinhan Wicasa’s favorite gray horse.

Hinhan Wicasa made him a counter offer. Hinhan Wicasa said that the white man didn’t have to do anything. He could be wherever he liked during the next thunderstorm. Hinhan Wicasa would just tell the Thunders to search him out and kill him. The bet was quickly cancelled.

One time Hinhan Wicasa was called to help a woman with a wandering mind. Hinhan Wicasa had her placed alone in a tipi, while her relatives insured perfect silence by keeping the dogs still. All night long Hinhan Wicasa sang to the spirits, praying for their help. The evil spirit fluttered about the tipi poles all night. In the morning Hinhan Wicasa sent a Spirit of Thunder and Lightning around the inside of the tipi and her mind was restored.

Two of the stories of the spiritual healing  powers of Hinhan Wicasa from Singing For a Spirit by Vine Deloria Jr. and as  recounted by Ihanktowan Dakota Elder, Phil Lane Sr., Mato Gi, Brown Bear

I like 2 walk in the thunder, I see people run,I smile & keep going

Comment by Dona Knapp on June 28, 2011 at 7:14am
To be that connected to Spirit is a wonderful thing. I have seen and been a part of many healings in my life, and as we become more in tune with Mother Earth we will reclaim our own gifts. Much respect to Hinhan Wicasa!

Comment by Bretney Jill Barling-Orris on June 27, 2011 at 11:36pm
You left out the part where the taunting white man accidently peed down his leg!! Baaaa Ha ha ha ha ha! I love it! Thank you so much for sharing your Dad with us!

Comment by Aurora Whitebird on June 27, 2011 at 8:56pm
Thank you so much for sharing these stories.  Our elders are such marvelous examples of strength, dedication, sacrifice and clear intent.  Their medecine is strong and we must strive to be more like them in these difficult times. Aho Mitakuye Oyasin

Comment by jim adams on June 27, 2011 at 5:21pm
Ah those scientific white people educated to believe in the scientific method as long as it fits their pocketbook and feeds their greed. Sorry to be so heavy handed with the verbiage.What is ......is. We have known that for a very long time. miigwetch for sharing these beautiful stories