My mom’s name is Elizabeth, and my father’s name is Oliver. Dad is a member of the Mohawk Nation, and my mother is an immigrant from France. The only other relative I have been close with, for as long as I can remember, is my Uncle James, who is my dad’s oldest brother. Uncle James has been a tremendous help throughout my entire life, but I’ll get to that later.

For the first few years of my childhood, things were straightforward and typical. It was fun, and there was no worry. My brothers and I got along, and my parents were decent people. I noticed they begin to fight when I was about five, especially when they were drinking, but I was too naïve to think anything of it. Thinking back, when they drank, they'd always end up fighting about money, about how to use it, to save it, and how much to spend.

We were not penniless for a low-income family compared to the homeless in the East Side of Montreal. My mother always said we were rich compared to them. When we would not have money for food, some days, I would question that point of view!

Uncle James would chip in sometimes, but he wasn’t wealthy enough to donate a huge amount. Still, mom would blame him for not doing more to help us. Despite all that, I never knew why they fought about money so often, instead of trying to be productive and doing something about it. The more they drank, the more they fought, sometimes all weekend!

In my early years, I went to a school called Tallpine Elementary. For a school, Tallpine was average. As far as frozen foods go, the food there was decent. I am a picky eater, though, so I didn't have a taste of the full menu. There were stupid bullies who just liked hurting others, but every school has those, so I didn’t complain much about it. I learned to ignore them most of the time! Whatever they said to me, I would say, “Thank you for noticing,” smile respectfully, and walk away!

The thing I remembered the most from Tallpine were the teachers. There were different types of teachers at Tallpine. Ones who came for their paycheck only and did their job just because they had to, ones that were interested in running the classroom as militarily as possible rather than teaching, and rarely, ones that were passionate about instructing and made learning a pleasant experience. I usually got the first two types.

My favorite teacher, Mr. Dantes, was the only teacher I had that was from the third category. He was young, in his 20s, and a fun guy despite me and my classmate's view that all teachers were slave drivers.Mr. Dantes was blonde, had blue eyes, and wore glasses. I thought he was tall when I was a kid, but 5'2” isn't that remarkable when I think about it. Still, the fact that I remembered what Mr. Dantes looked like, in the first place, shows I held him pretty high.

Mr. Dantes had a way of engaging young people in learning and had methods to make it like we were playing a game. My only problem with him was that sometimes his humor didn’t fit the situation. Even with that, he was able to tell when he needed to shift his tone and get serious.

I’d say I got decent grades in my first years at Tallpine. Some B’s, some C’s, maybe an A, here and there. I never really cared to study except for tests. Being a school that had a French program in it, it was also mandatory to learn some of that. Honestly, French was something I struggled with a bit, even though I had learned a lot of French swear words from my mom, otherwise, things were excellent and straightforward.

Then, when I was in about 6th grade, things started going wrong. I had an elementary understanding of what my parents had been shouting about, but I was still too young to think too deeply of it.

My dad was usually busy doing high steel work. It was when he came home drunk, and my mom started asking about his income and where his money went that there was conflict. Mom was not innocent herself. She kept her "medicine" hidden in different places, so she could have a quick drink when needed.

My parents started fighting and drinking more and more often, and my brothers and I got stuck in the crossfire. I always managed to be the one that got involved the most since my older brothers were at the age where they could find convenient excuses to be gone.

Eventually, it got to the point where I told one of my friends at school about what was going on because I felt like I needed to vent so badly. Give or take a week or two, rumors were all over the place about me and my drinking, fighting parents.

The bullying started getting worse because there were more reasons to make fun of me. My friends played coy or acted like I was overreacting. Even classes with Mr. Dantes started to lose their appeal when the bullies found ways to reach me there.

I got followed back home once or twice. Sometimes I’d find mean messages on the doorstep, but, for then, the bullies never did anything worse than that.

Uncle James would come over and lend me emotional and spiritual support, from time to time, so I have him to thank for helping me endure this part of my life. My mom told me that my Uncle James was on the wagon.

When I was young, I did not understand what she was talking about because Uncle James always drove a pickup truck. When I got older, I knew that this meant. He did not drink alcohol like my parents.

Eventually, a huge fight broke out between my mom and dad, with screaming and yelling on levels I’d never experienced before. When it finished, my mom noticed me and walked over, screaming "It's all your fault!" before slapping me across the face.

I'd never been hit, much less hurt by my parents before, so it was natural I was pretty shocked. I just stood there for a few seconds before I ran off to my room crying and screaming. It was a profoundly traumatic experience for me.

The next day, dad was gone, which didn’t make things better. I waited for him to come back, but he never did, leaving my brothers and me with mom. It was at about this time that Uncle James became absent as well.

Come graduation from Tallpine; I was very miserable. My grades had fallen, I was sure all my friends were disregarding me, my brothers were away from home, more and more, and Mom got meaner and meaner!

Being the school it was, nobody at Tallpine cared enough to see what the problem was before I left for the summer break, before going to high school. Mr. Dantes did show some concern, but I never had a real opportunity to tell him all my problems.

Summer went by pretty horribly, with every day filled with yelling and fighting, especially between Mom and my older brothers. After each fight, she would require more and more of her "medicine." I was hardly able to enjoy myself because my mother kept punishing me for the littlest things and making sure I had nothing enjoyable time to myself.

Some of the bullies would come by and taunt me through the windows of my house. I never found out if they lived nearby or if they had the dedication to ruin my life. My mom never did anything about it because she was too busy yelling her head off to listen to me.

In the last days of summer, a group of older boys started hovering around my house. They’d come by when mom wasn’t around and vandalize our yard or egg us. I didn’t know them, but my brothers claimed they were a group of delinquents from their High School that they somehow managed to piss off.

The day before we had to go back to school, they came and broke into our house while my mom was out getting more medicine. My brothers had to hold back the bullies so I could run, and so I did. As it turned out, my brothers had been beaten-up and humiliated to the point of one of them getting hospitalized.

My brother, not hospitalized, told me that the scars he got ran deeper than flesh and that they would never heal. He did not say what happened in words, but I felt and understood what happened to him! It made me sick!

I do not know how to repay my older brothers for sacrificing themselves for my protection. They told me that was what older brothers did. When mom came home, of course, she found some ridiculous way to blame us for all that happened.

It was about this time that Uncle James came back into my life. My dad went to New York to work on high steel, and Uncle James had spent almost two years trying to help him get sober. After Uncle James had realized it was a lost cause, he told me he decided to to do the next best thing and take care of me.

About that time my older brothers moved out. They could not take it anymore at home and found their "medicine" in the Hochelaga-Maisonneuve neighborhood in East Montreal. They call their medicine "Crack" and to keep getting it; they sell it.

Uncle James didn’t know too much of what I had been going through, but as I told him more and more, Uncle James began to understand. He’d regularly take me out to movies, the park, and stuff like that, to get away from home’s problems. We’d eat and chat, do fun activities away from town, lots of stuff that helped me out.

Something I didn't know was that he was fighting for custody of me and getting social services involved. By that time all my mom lived for was her medicine and didn’t care. Uncle James always said she was sick, and we would pray that she would wake up and recover. 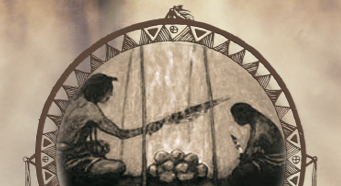 Uncle James, eventually won, and, although I was confused about what happened, I admit I was glad when he took me away to go live with him. I even got to have my room to myself.

The first thing he had me do after I settled in was to go a Sweat Lodge with him. After I had entered the dark Lodge with my new friends and family, the first splash of cold water on the red-hot rocks let me know I finally had come home.