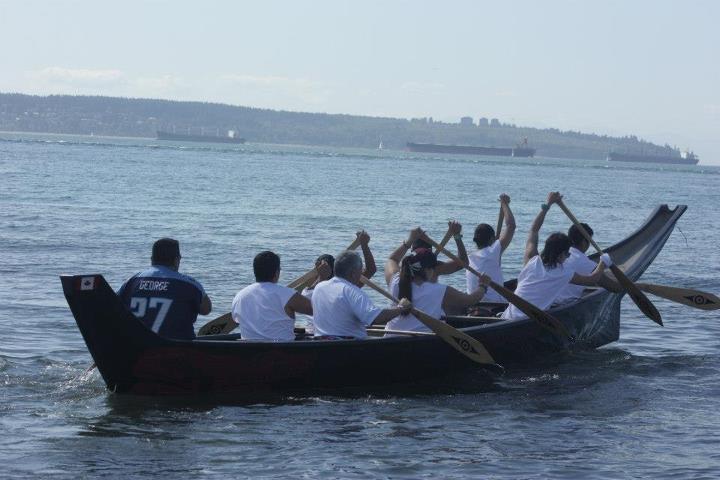 It was one of my lifetime highlights paddling with Tsleil-Waututh Nation on the Chief Dan George Canoe from the unceded lands and waters of the Squamish Nation, under the Lions Gate Bridge and then a long pull to the Second Narrows Bridge and on to the loading docks where Kinder Morgan loads 700,000 Barrel Tar Sand Oil Tankers destined primarily for China.

After a Powerful Sacred Ceremony on the waters surrounding Kinder Morgan’s Loading Docks by Squamish Spiritual Leader and Sun Dance Chief Robert Nahanee, backed up by songs by Tsleil-Waututh Sun Dance Chief Rueben George and other Squamish and Tsleil-Waututh Elders, we canoed back, with Canoes from Canada and the US across the unceded Burrard Inlet to the unceded Tsleil-Waututh Nation Whey-Ah-Whichen beach ( Cates Park ) for more ceremonies, talks by selected witnesses, a wonderful reception by a beach full of supporters and a great feast for all in attendance! 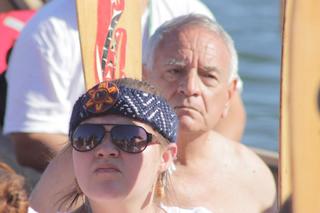 The spiritual message was very strong and clear-no further expansion of Kinder Morgan Tar Sands Pipelines and Tankers will be allowed on the unceded lands and waters of the Salish Seas! I pity Kinder Morgan and the Canadian Legal Order if they choose to violate the unceded Coast Salish Legal Order and the immense spiritual forces that were prayerfully actualized to Protect and Restore the unceded Salish Sea! It was a day that will remain enshrined in my heart and soul forever!

My hands up to Tsliel-Waututh Chief Justin George and Council and Squamish Chief`s Gibby Jacobs and Ian Campbell and Council, Tsliel-Waututh Spiritual Leader Gabe George Sr., Squamish Spiritual Leader and Sun Dance Chief Robert Nahanee and Tsliel-Waututh Spiritual Leader and Sun Dance Chief Rueben George, Skippers and their Canoes from the various Coast Salish Nations that gave their heartfelt support and the many Tsleil-Waututh and Squamish community members and allies that gave dedicated and loving time and energy to make made this historic gathering a great success! Never forgetting that these thier dedicated efforts are built on the heartfelt efforts of other Squamish and Tsliel-Waututh leaders like Chief's Joe Mathias, Lois Guss, and  Bill Williams from the Squamish Nation and Chief's Leonard George and Leah George- Wilson from Tsliel-Waututh Nation and the countless others who supported them and those before them, on the journey in support and upliftment of the People! As well as,  the younger generations who are gracefully and powerfully stepping forward like Mandy Nahanee and Rachel George that will insure ultimate victory for the People long after my generation has made our journey to the " Other Side Camp"!

With Heartfelt Love and Thanksgiving,

Yes, how amazing. I can feel the spiritual energy in your words beloved Dekshi. Wado for sharing this historical and spiritual experience.

What an amazing time that must have been. There was a lot of spiritual firepower in that little boat!