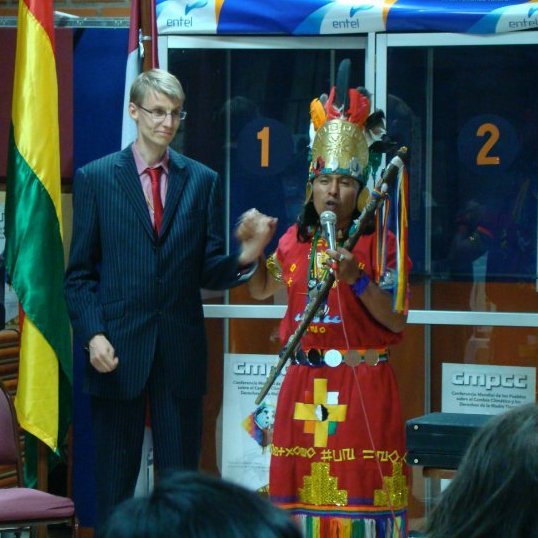 Veli Albert Kallio, FRGS has not received any gifts yet

In a few words, please tell us why you would like to join our community:
My public relations officer at the United Nations is Angelia Evans, of Hopi Indian descent and I have been investigating Hopi Nations 1992 UN General Assembly Motion, been press-speaker for RSE VII convened by HE Kofi Annan and most recently at RAI 2016. I support Banyacya-Lyons motion on 10th December 1992 and conducting some geophysical experiments that validate it.

On 7th January 2010 His Excellency President Evo Morales Ayma of the Plurinational State of Bolivia invited me to set up three sessions at the Cochabamba Climate Summit in Bolivia after the failure of the United Nations Framework Convention on Climate Change (UNFCCC) to continue pursuing the Kyoto Agreement of the UN Conference of Parties 2 (COP3) and the Bali Road Map (COP13) at the Copenhagen Summit (COP15) where these were abruptly terminated and substituted by "the Copenhagen Accords", a non-binding statement due to collapse of talks.

I presented an update on the investigation request that the First Nations of the Americas made to the United Nations (UNGA101292) on 10th-11th December 1992 to open the first UN's Year of Indigenous Peoples (1993). This ethnoclimatology motion was presented by the late faith-keeper Thomas Banyacya (of Hopi Nation) and introduced and seconded by the faith-keeper Professor Oren Lyons Jr. (of Seneca Nation) to the UN General Assembly on 10th December 1992 in the immediate aftermath of the United Nations Conference on Environment and Development (UNCED), that had convened a few months earlier in Rio de Janeiro, Brazil, 3-14 June 1992.

FIPCs purpose is to re-present the investigation request to the United Nations General Assembly and upgrade the UNGA101292 to the United Nations' Security Council investigation by state sponsorship and seek validation of the Native American Indian version of history by several geophysical experiments and expeditions of type that will data-validate (or dismiss) the claims made by the First Nations on 10th December 1992 proposing an alternate "causative, duration and termination history of the Ice Ages era" as suggested by the late faith-keeper Thomas Banyacya drawing on ethnohistory of the Hopi Nation (which is largely in agreement with the Sun Ages of the Mesoamerican and South American recollections of present climate having been preceeded by three other climate epoch since the arrival of the First Nations from North Asia to the Americas).